“This is how it works.  I love the people in my life, and I do for my friends whatever they need me to do for them, again and again, as many times as necessary.  For example, in your case you always forgot who you are and how much you’re loved.  So what I do for you as your friend is remind you who you are and tell you how much I love you.  And this isn’t any kind of burden for me, because I love who you are very much.  Every time I remind you, I get to remember with you, which is my pleasure.” — James Lecesne

It’s that simple.  And that complicated.  Coming out of my little migraine haze yesterday, I found that in a 24 hour time span, I had missed a lot of important stuff.  Stuff that is important to me.  My circle of friends is small – though it has grown in miraculous ways over the last six months.  At the ripe old age of not-so-young,  I hold my friends close.  Perhaps it is because I lost one of my closest friends to suicide ten+ years ago.  I’m not ready to write about that just yet.  But I would call her Winnie (long story) and she would call me Piglet (a size thing – not so long a story) and though we held few secrets, I never thought she would need to leave this world.  I truly believed that as long as she knew that I was always at the end of her rope when she reached it, she’d hold on.   But she couldn’t.  Again, a story for another day when the sun is shining and my heart can risk the mention of her name.

Yesterday one of my friends was circling the abyss which is filled with doubt and dread and darkness.  I wasn’t worried that she would slip, I worried  that she didn’t know that she had safe haven from the awfulness that was riding on a non-stop carousel in her head.  She kept switching seats;  some of the horses were magnificent (and went up and down); others were fierce though immobile, yet too seductive to ignore.  I’m not blessed with a sixth sense – but I do begin to feel uneasy.  Not hearing from Simon made me worry enough that I couldn’t let it go until I heard from him.  Reading a message that held a more important message behind the words sent me to a very special friend to check in.  The silence before she responded to me was interminable.  The fact that I caught her on the merry-go-round as she flew past one horrid thought after another was luck.  Luck and the evidence that there are invisible connections between friends that bind them in amazing ways.

Sometimes life overwhelms.  Despite all of our efforts to see the sky and believe in the beauty of all things, days can just…well, suck.  I don’t know that friendship can change the course of a day; it can perhaps slow down the carousel long enough so that someone can get on the ride and saddle up next to you.  You can each hold onto your pole and circle the darkness together.  Sometimes just having someone next to you makes the continuous rotation less dizzying.  The key to friendship is wanting to be there even if you hate carousels, if the depth of the abyss scares the hell out of you, but being present for your friend trumps any hesitation.  Other times you just have to hug hard and bring Kleenex.

Pain and confusion, the enormity of choices we make throughout the course of our lives – they arrive and take their own time to work through to resolution.  Friends can’t eliminate these realities; they are safe havens when someone needs it – whether or not they know it.  Friendship reflects the awesome power of love that won’t back down.

“Piglet sidled up to Pooh from behind.  “Pooh?” he whispered. 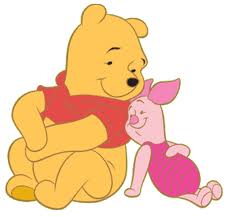 That power of love – it can get you through an awful lot.  It can give you the gift of being your best self.  And in doing so – everyone feels they have received a prize at the end of the ride.