“…here is the deepest secret nobody  knows

higher than the soul can hope or mind can hide)

and this is the wonder that’s keeping the stars apart

i carry your heart (i carry it in my heart)”

—e.e. cummings – i carry your heart with me

My mom would have been eighty-five years old today.  Seven years of not calling her first thing in her morning to sing “Happy Birthday”, seven years without celebration, seven years since I chose a gift for her.  Seven years and I can still hear her voice.  No one calls me ‘schatzi’ anymore.

Make no mistake, mom was a complicated woman with more reasons than most for some of her challenging qualities.  She was beautiful for sure and  incredibly talented artistically, able to make a slab of marble breathe, mold clay that came to life in a kiln.  She sketched and painted and studied – movement and the human form, meadows caught in play with the wind.  And when she lost interest in the delight of pencil and sketch pad, something bigger than any result got lost.  She was a haunted soul.  Haunted by the impact of having life, when so many of her family were lost during the war.  Part of the ever-diminishing segment of the population who bore witness to the unimaginable horror of the Nazi occupation.  Plagued with trauma I can’t begin to imagine, nor really took the time to understand as completely as I should have.

My former brother-in-law wrote her obit for the New  York Times which made the brief tribute all the more personal.  Her parents took the family out of Austria shortly before the Anschluss, “..making their way first to Belgium and then through occupied France.  the family made its way to Portugal, where on August 6, 1941, they found passage among 765 other refugees on the Spanish freighter Navemar – one of the last voyages of escapees from Europe.  [Her] children and grandchildren bear in their hearts eternal, existential gratitude for her family’s valor and persistence…Our family is particularly gladdened that [she] lived long enough to know of the safe return..of her eldest grandson…from Iraq, where for the past year he has served in harm’s way the country that gave his grandmother safe haven.”

The stories of the Navemar’s voyage are beyond the pale.  A freighter that was never intended to hold more than 30 people.  The horror was unspeakable and a subject of articles written by those far more knowledgeable than me.  My mom was fourteen when she arrived at Ellis Island. 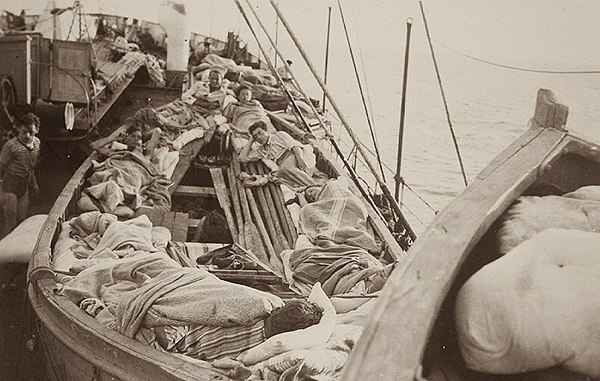 I don’t know about why one journey ends and another begins.  Maybe dad left to make sure that my son would come home.  Perhaps mom left once she knew he was here and that all her grandchildren were present and accounted for.  All I know is that some days are far harder than others, and I suppose they should be.  It is the movement of the human form – the bend in the head, the tear rolling to the chin, the beating of the heart that carries so, so much.

A seasoned HR executive, working as a consultant and speaker on issues pertaining to organizational dynamics, strategic development, training and professional growth. Mentor, advisor, provocative thinker with post-grad work in clinical psychology. Mom, wife, sister, friend and supporter of all those still reaching View all posts by mimijk

Leave a Reply to Bonnie at {PaperKeeper} Cancel reply