Have you ever had one of those moments when you pass by a window and catch a glimpse of your reflection without recognizing yourself – albeit briefly? Please nod your head affirmatively, or I’m going to seriously wonder if my crazy level just escalated.

Is there any greater dissonance than not recognizing who you are? Who you have become? Accepting that none of us perceive ourselves as we are perceived by others, at least our self-perception should align with what we see. And I have to admit, that there are moments when they just don’t line up.

When my head insists that I can rock an outfit which a) I clearly can’t and b) is arguably no longer in style; when I sit in meetings where people moan about millenials and I wonder why they’ve skipped two generations in the dialogue (including my own – hello???); when I dance around my house (full disclosure – only the dogs witness this activity) and find myself hoping the next song is a slow one.

The moments when I realize that my children are now men. Awesome men. No longer in need of that overpowering, all encompassing love that arrived in utero. In my head I am still able to carry them on my hips, pudgy fingers around my neck, little boy sweat and kisses that smacked. And always sensing that if I hold on too hard they will have to wrest themselves from me painfully. I tried to keep my grasp loose-ish. Do they even have these reflections in their mirrors? Perhaps somewhere. Certainly not something they consider when defining themselves at this point in their lives. Nor should they. It isn’t time.

Am I the woman in the little black dress meeting Andy for the first time 23 years ago this week? That curiosity and humor and hint of possibility filling the Georgetown harbor with something unrecognizable yet familiar? I could probably fit into the dress (there was some lycra involved I’m sure), but would I recognize the woman? Sometimes, perhaps…when we dance in the kitchen to a song of Andy’s creation (don’t ask).

So many passages that define this reflection, so many exhilarating moments and sad lessons, an awful lot of pain and kindnesses of indescribable magnitude. To look in the mirror and see that I’m still evolving, the image isn’t static even though there’s something to be said for thinking one is frozen in time. The reflection is the reality – no longer eligible for the ingenue roles, juggling mom, menopausal manic, or driven senior executive. Now? Good question.

The reflection is still blurry, morphing into something gentler, arguably a little easier on the image staring back. Perhaps a little less intrepid and sensing something that haunts my thoughts in ways that are unfamiliar – the limits of time maybe?

The eyes though – the eyes I recognize – they crinkle from laughter, they well too easily, they look to the sky with such gratitude. Sometimes I don’t recognize the face in toto – I just recognize the heart. And sometimes that’s enough. 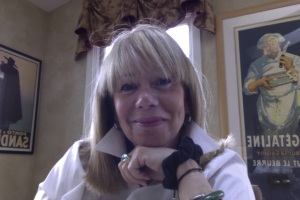